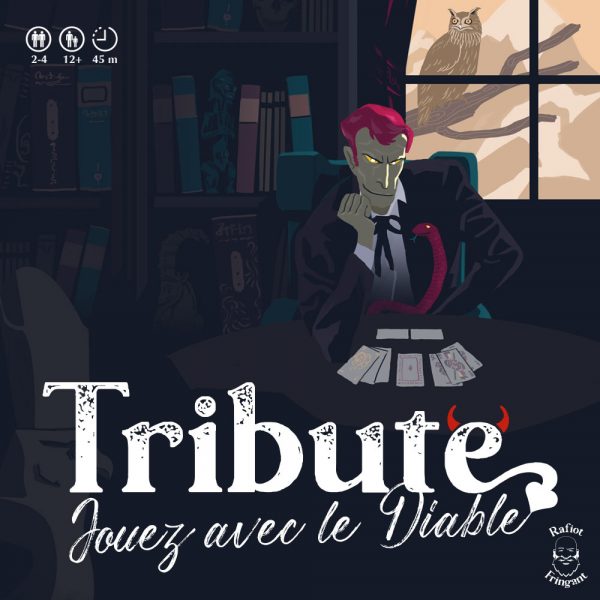 Tribute is a narrative game played with a 54-card deck, based on the principles of blackjack and storytelling. Experience stories as easily as you imagine them!

Available soon. To keep you informed of its progress, I invite you to subscribe to my newsletter :

With a simple 54-card deck, invent and live adventures together around a table. Thanks to the principles of blackjack, you will be able to create stories with your imagination and creativity as your only limit.

Tribute is a narrative game. As such, its objective is to live an adventure with friends, around a table, each one bringing his contribution to it. Through an ongoing dialogue, the leader sets the main lines of the story, embellished with challenges to be taken up, and the player plays a character by acting on them. There are no winners or losers. A successful game comes down to the pleasure the participants have taken in being all actors in this collaborative story. 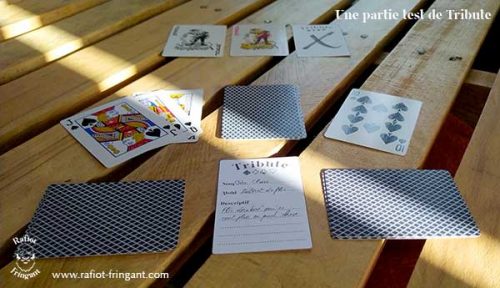 How does it work?

Tribute is based on the rules of blackjack: get as close as possible to 21 without ever exceeding it. Each player chooses a colour. The value cards (Ace to 10) make up his draw pile with which he will be able to act, and the tricks will allow him to choose the way he will carry out the actions. With each card placed, the player will have to add a narrative element to the story. Combinations such as blackjack or sequence have special effects.

In this way, the players build a story together, starting from a framework, an initial situation and an objective.

Several settings and scripts are included in the rulebook. Setting up a game takes about 10 minutes: time to read the script and create the characters.

Why did I write this game?

How many times after seeing a movie, even a bad one, we thought “Oh, that would make a good story to play”. Tribute to this vocation to easily transform a context into a light and complete game to share together.

Who is Tribute for?

Tribute lends itself particularly well to action, thriller and horror. The games are short and intense, with a strong immersion. And having tested it with beginners, it works wonderfully well for introducing them to narrative games, thanks to its great freedom and ease of handling.

Tribute rules are written. The scripts still need to be formalized. And above all, continue to do tests, in order to find ways to improve it. A publication in a few months is perfectly possible, first in french.

What form will Tribute take?

Later, I am considering a Print On Demand version, or ideally, a crowdfunding for a boxed version including a custom deck of cards.

There are no reviews yet.

Only logged in customers who have purchased this product may leave a review.

Wanna talk about my games, make feedbacks, or suggest improvements ? Join my