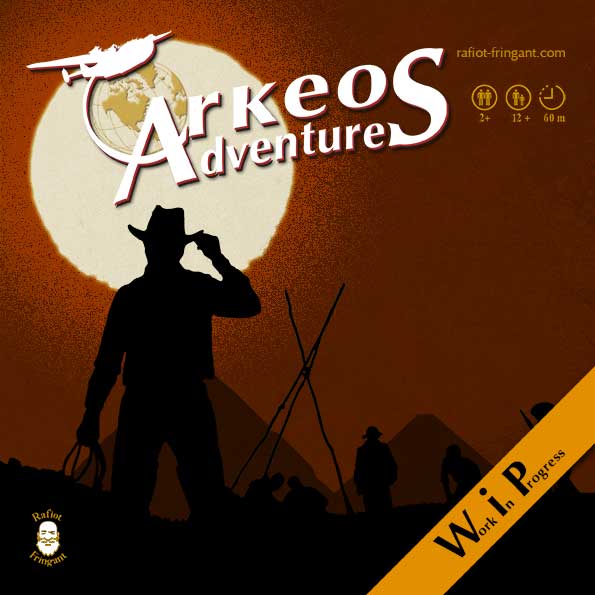 Check your gun, hang up your whip, and above all, adjust your hat. Search for lost treasures against vile Nazis ready for anything.

Arkeos Adventures is under development. I invite you to subscribe to my newsletter to be informed of the progress:

In the dirty thirties, lawless treasure hunters, led by Nazi dignitaries, tracked down antediluvian artifacts around the world. Their goal: to find legendary treasures for the glory and power of the Reich.

But in front of them stands a group of ruthless archaeologists, the only bulwark against the madness into which the world will sink. Join their ranks and fight against these fanatical looters, and discover powerful relics that may well change the course of history.

Arkeos Adventures allows you to experience an adventure where heroes will set off in search of lost treasures before the fanatics get their hands on them. In the pure pulp tradition, they’ll have to avoid twisted traps, explore gigantic ruins, negotiate with fierce tribes of natives, confront strong opponents, and cross unfathomable precipices… In the pure Indiana Jones tradition!

How does it work?

One of the players assumes the role of director, the others play the heroes. Thanks to the script of the film, they will together bring it to life and live a worthy adventure.

Each hero is defined by cards: Identity, Occupation, Profile, and several Resource cards. These give him a basic level to perform all kinds of actions during the game. Each hero has action points that he can use as he pleases by describing what he does and betting for each one. However, if the stake in an action exceeds half of his available action points, he takes risks and will have to draw a Fortune card. 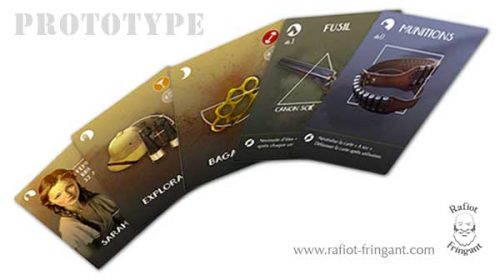 For his part, the director unfolds the scenes proposed by the script. For each of them, he places one or more danger level cards, face down.

If the score obtained by the player thanks to his level and his stake is higher than the level of danger, his hero succeeds in the action undertaken.

The bluff and the choices made by the players are at the heart of the resolution mechanism. Chance only comes into play when a hero steps out of his comfort zone and takes risks

Arkeos Adventures has been in development for several years. At the creation of the Rafiot Fringant, I rethought everything, or almost everything, with the aim of having resolutely intuitive rules. They are currently being tested in order to make the necessary adjustments. The universe is largely written. It’s progressing, but I’d much rather take my time to deliver a quality game, without rushing.

For those of you familiar with the first edition of Arkeos

Since the first edition of Arkeos (in french), released in 2005, the game has evolved a lot. From a “classic” mechanic, it has evolved into a game based on narration and immersion, thanks to betting and bluffing. The universe has become more refined, focusing fully on the existence of relics of unknown civilizations, and the echo they might have in contemporary history. The era remains deliberately unchanged, making Arkeos context material fully compatible with Arkeos Adventures.

Why this new edition?

When it was released, Arkeos was very well received. It made an impression despite its flaws: the directness of the scenarios and a mechanics not necessarily adapted to the pulp atmosphere. Aware of this, a new version took shape in my mind. And above all, the desire to continue to bring this universe to life has grown stronger and stronger, rocked by the classics of the genre and more recent inspirations, such as the latest versions of Tomb Raider and Jumanji.

What form will Arkeos Adventures take?

As it stands, I envision a game box containing cards, tokens, a game screen, and three booklets of about 40 pages each: one of rules, one of universe, and one of adventures ready to play.

There are no reviews yet.

Only logged in customers who have purchased this product may leave a review.

Wanna talk about my games, make feedbacks, or suggest improvements ? Join my